History of the National Ignition Facility

The formal commencement of NIF was the signature of NIF “Key Decision Zero” by then- Secretary of Energy, Admiral James D. Watkins (retired), on January 15, 1993. Site construction on the 192-beam laser system—the size of three football fields and 85 feet tall—began with the NIF groundbreaking ceremony in May 1997. 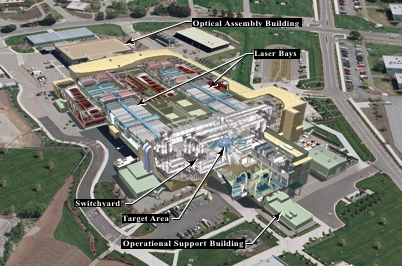 In June 1999, the 264,000 pound, 10-meter- diameter target chamber was moved from its assembly pad across the street from the facility and installed into its berth 21 feet below ground level using a 900-ton steel crane from the Nevada National Security Site.

The conventional facility was completed in 2001. In April 2003, the full 192-beam beam path was completed in both laser bays. In May 2003, NIF produced 10.4 kJ of ultraviolet laser light in a single laser beam line into a dedicated precision diagnostic system as part of the NIF Early Light (NEL) campaign, setting a world record for laser performance and meeting its primary criteria for ignition. The first NIF target physics experiments, involving laser–plasma interaction studies in small gas- filled targets (“gas pipes”), were also executed during the NEL campaign.

October 2004 marked the end of the NEL effort, and build-out of the NIF facility resumed full-time. This period of construction consisted largely of installation of modular line-replaceable units (LRUs) in the previously established facility infrastructure. By the completion of construction in March 2009, over 6000 LRUs had been installed in NIF, including over 3100 pieces of amplifier glass, 8000 large optics, and 30,000 small optics.

Target experimental campaigns began at the end of 2008 using hundreds of kilojoules  of energy. Since that time, NIF has been conducting experiments in support of national security, stockpile stewardship, and basic science, with much of the effort dedicated to demonstrating inertial confinement fusion (ICF) ignition in the laboratory for the first time. The NIF laser has demonstrated that it meets all specifications required for ignition and stockpile stewardship.

In late October and early November 2010, NIF set world records for neutron yield from laser-driven fusion fuel capsules and laser energy delivered to ICF targets. These experiments followed closely on the heels of NIF’s first integrated ignition experiment in September 2010, which demonstrated the integration of the complex systems required for an ignition campaign.

Experiments in 2011 and 2012 continued to explore ignition physics. Several scheduled maintenance periods allowed NIF to ramp up in operational capability with higher laser energy and power, new diagnostics, and other new capabilities for high-yield ICF implosion experiments. On July 5, 2012, the laser system delivered more than 500 terawatts of peak power and 1.85 MJ of ultraviolet laser light to its target, validating NIF’s most challenging laser performance specifications, which were set during NIF planning in the late 1990s.

Since 2012, NIF has continued to evolve as a user facility. A gathering in the summer of 2013 of national experts in the areas of facility management and high-energy-density experiments launched a 120-day study to improve operations, efficiency, and user experience at NIF. Since then, the number of target shots has increased. One hundred seventy-nine target shots were completed in FY2012 (October 2012 to September 2013), 209 in 2013, and 191 in 2014. The facility performed 356 target shots in FY2015, a >50% increase in the number of target shots from the previous year. The facility shot rate is expected to continue to increase in FY2016 and beyond. The increase has mainly been accomplished  by improving operational efficiency during and between shot sequences, performing similarly configured experiments in sequence to minimize transition time and streamlining the experimental request and review process (see Section 3.2 for more information on the experimental process).